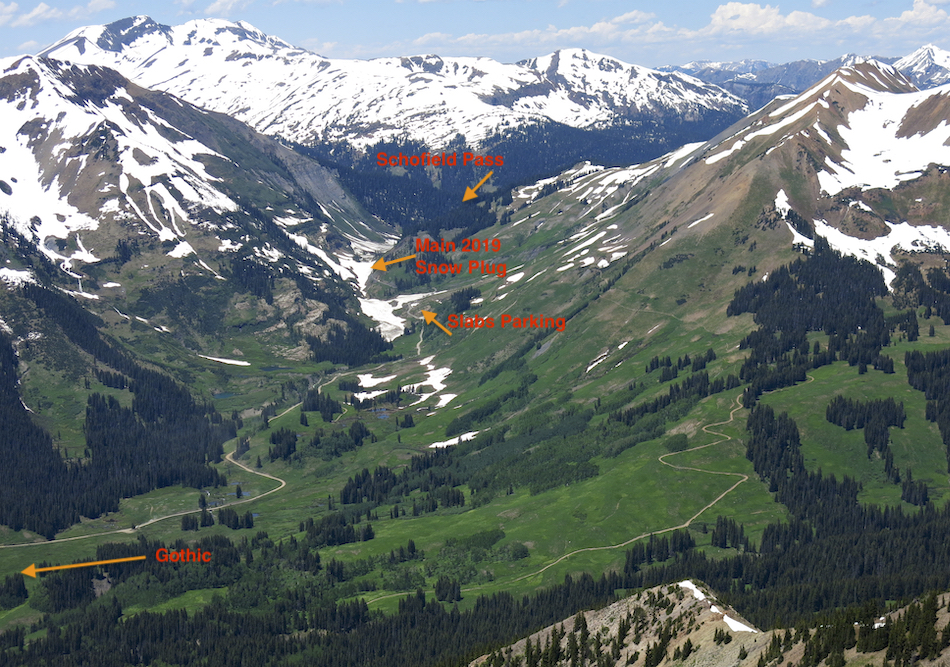 Over the past few days I was up on Mt Baldy and Avery with some views toward West Maroon Pass and East Maroon Pass. Also drove up Schofield Pass to see where the current parking is. All and all, things are melting out, flowers are popping out, but there are still some big snowfields in the alpine.

The good news here is that you can easily drive all the way up to the “Slabs” parking. That will probably be the parking area on Schofield most of the summer as the snow plug is a big one this year. The Schofield Pass weather station at 10,400ft is reporting no snow on the ground, but I’m sure there is still snow in the trees on top of the pass currently. Another week and I bet that snow is mostly gone along the road in the trees. It’s about a 2-mile walk along the Schofield Pass Rd from the Slabs parking area to the normal West Maroon TH in Schofield Park.

The West Maroon TH in Schofield Park is free of snow. While the trail from there headed up to West Maroon Pass looks mostly free of snow, green and dry for the first couple miles. I bet the flowers are starting to pop out on those sunny hillsides. Then there looks to be some big snow fields still as you get near the turnoff for Fridged Air Pass. I haven’t had any view on the Aspen side of the pass. Finding a route around a Cornice seems like a likely thing to deal with. I would also guess there is some good snow coverage for the first several miles below the pass, then there will be the normal muddy conditions to follow. Creeks are still running high right now, but they have already peaked and will be coming down with more time.

From Judd Falls up toward East Maroon Pass the trail looks dry again for the first several miles. I didn’t have good views up near the pass, but would guess that you start running into snow as the trail starts gaining elevation in the trees below Copper Lake. I could see towards Copper Pass and Triangle Pass and the trail was dry in the alpine as it traverses those steep southerly facing slopes. Then snow was still hanging out in the high basin between Copper and Triangle.

The majority of our costumers have little to no experience with summer snow. That’s probably what leads to many concerns about the current conditions and is totally fair. Some folks are talking about snowshoes. While maybe that works for some, that may not be the best tool for the conditions. Summer Snow is set up and your regular foot print doesn’t sink much into it, unless you are where the snow depth is shallow near its edges or near rock outcrops for example. If anything snowshoes are going to make traveling on the snow worse as you can’t edge into the snow with snowshoes on, and you will probably end up slipping more often then if you didn’t have them on. The little spikes below the snowshoe may help in the flats, but not on a slope. What you need, is a stiff soled hiking boot. That will allow your feet to stay dry as you walk through the flats, and the stiff sole will help you edge, and kick steps in the snow as you traverse across snow slopes. Micro Spikes that go over your shoes can also help, they are kind of like putting chains on a car tire. The potential danger spots are the steep snow slopes near the mountain passes. Where if you fell on the snow you could slide into rocks that were melted out below. That’s where an ice axe is still good so you could arrest and stop yourself if you fell. That axe can also allow you to have a wildly good time sliding on your butt, or glissading, as you head downhill. Of course, you have to know how to use the gear if you want to use it.